Half of my title is “Distance Services Librarian,” and while I had taken online courses while obtaining my library science degree, I wasn’t sure how to start integrating library resources into online courses, which have grown massively in number here at John Jay. I talked with a lot of librarians at other colleges who worked with online classes, and many said they’d been  embedded librarians.

The literature about embedded librarianship is either about a librarian assigned to an in-person class who shows up in the classroom every week, which is not what we’re talking about and also sounds v. exhausting, or about a librarian who visits a Blackboard course and posts content. Looking into the latter, there are many articles about the topic, but not a lot of actual examples. So here are some from my own experience.

Workflow of our embedded librarian program

Examples of embedded librarianship in Blackboard

These are screenshots from courses (edited to anonymize everything but me).

Example from a lit class. Click to view larger

END_OF_DOCUMENT_TOKEN_TO_BE_REPLACED When I code, I love simply copying and pasting from an example website or someone’s open source code. Most of my projects begin as a collage of different code samples that are gradually tuned to my goal. That copy/paste ethos informed my latest work in progress, the Faculty Toolbox.

The Faculty Toolbox is a goody bag for John Jay faculty who teach online. Inside, there are special library modules they can drag & drop into a course shell; simple instructions for embedding streaming videos; a proxied link generator; and basic info about library liaisons and how I, the Emerging Technologies & Distance Services Librarian, can support online teaching.

It’s a little thing, but it’s a big thing. The Toolbox has been a conversation piece in multiple meetings I’ve been in, and whenever I unveil it, there’s definitely an ‘ooh!’ response to seeing a collection of useful resources prepackaged and offered on a single page. It’s not just a toolbox; it’s a gateway.

The terminology I use is important. “Toolbox,” “goody bag,” “starter kit” — these are all phrases that call to mind a plethora of shiny items without being overbearing. There’s no “template” or even “guide” happening here; this is a partnership between the library and faculty, rather than a service or directive. And phrases like “generator” or “drag and drop” are derived from exciting action verbs that imply quickness and ease.

That intentional terminology is a response to one barrier to using library resources in online classes. It’s not that it’s difficult, per se, but it’s a bummer to have to scurry all over the library website(s) to gather teaching materials for students. By all means, that’s part of creating course curricula — but the simpler things, like linking to APA/MLA citation guides, should be easy as pie, and we make it so.

Lastly, the Toolbox can be a Cave of Wonders, too. So many faculty haven’t realized the richness of our streaming video collections. When I show it to them (or when they glance at the sample videos I linked to), a whole new world of engaging course content opens up.

The Faculty Toolbox is linked from our Faculty Resources list, where they can also find important information about citation metrics and purchase requests. It’s also linked from the John Jay Online faculty resources page, and it’s been emailed to all JJO instructors, too. And in the fall, I’ll be showing it off right and left at a number of workshops in different contexts — Faculty Development Day, Blackboard training workshops, and more.

Our Toolbox was inspired by the one at FIT, which was created by Helen Lane. She mentioned this at an ACRL/NY Distance Ed SIG last year, and it’s an excellent example. Take a look — she makes it so easy to embed many things.

What else would be appropriate to include in the Toolbox?

Previously: The Murder Mystery Challenge: a pilot project with an impressive turnout (2013) 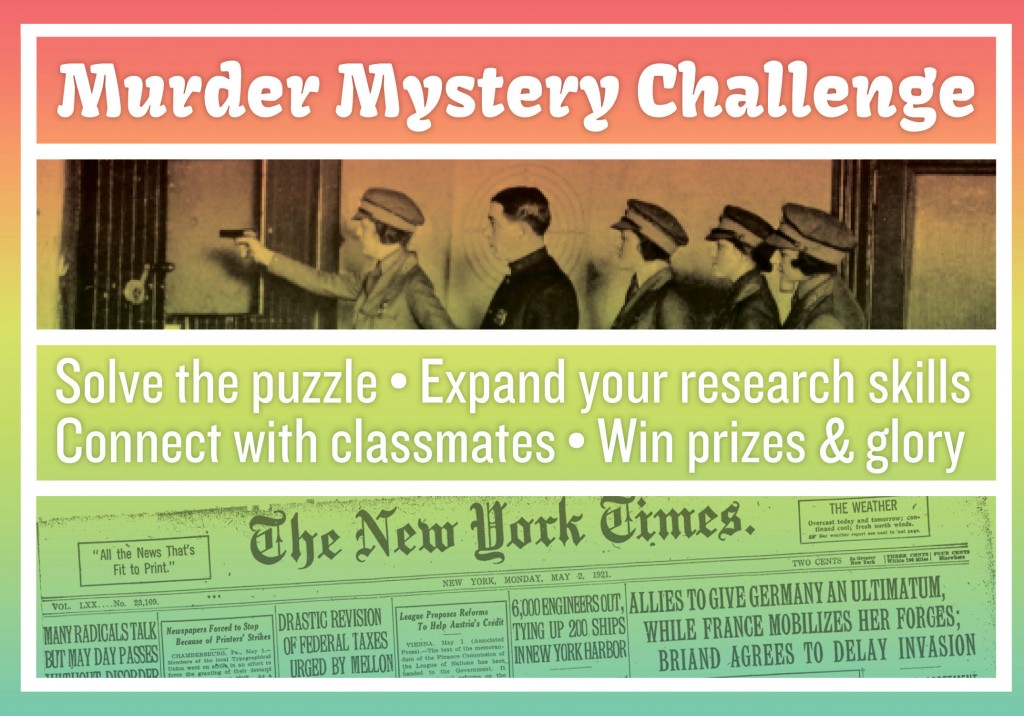 In the fall of 2013, my colleague Marta and I created and organized a Murder Mystery Challenge for first-year students, teaming up with the Peer Mentors in the Student Academic Success Programs here at John Jay. It was so successful that we did it again in fall 2014!

The Murder Mystery Challenge is designed to walk first-year students through basic research tasks. The Challenge follows a murder case narrative based on a real 1921 crime. Students work in teams to use historical resources in the library to solve the mystery.

Based on student feedback in fall 2013, we made these changes: 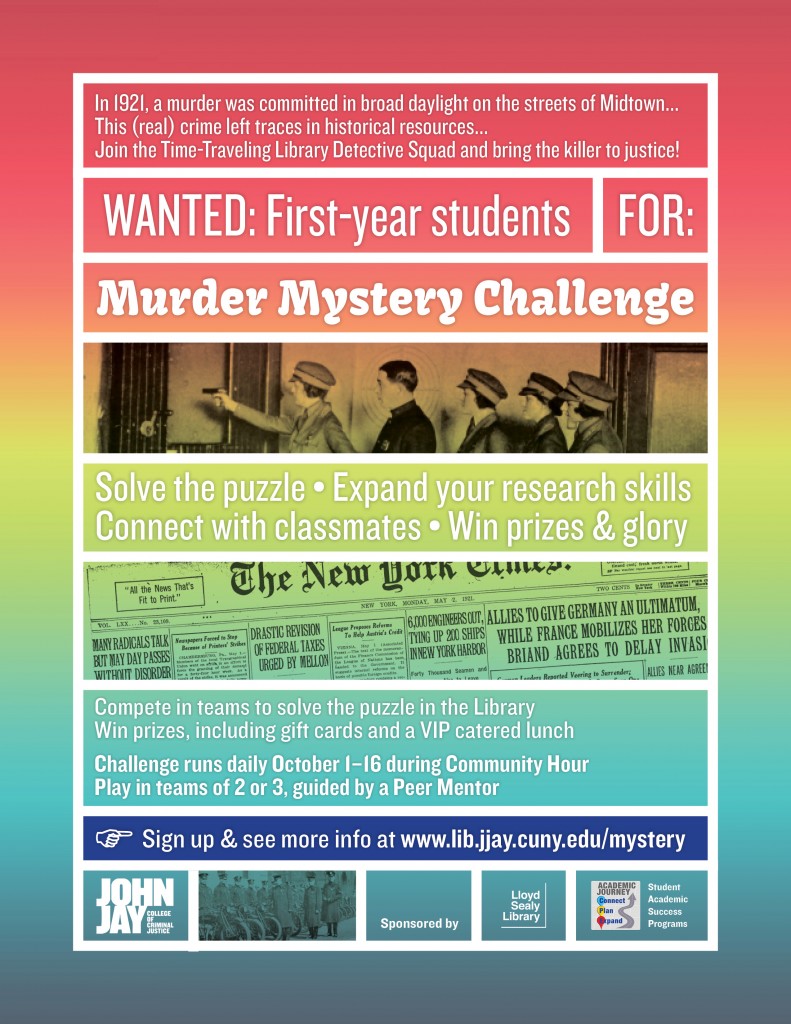 We collected feedback from a survey sent out afterward. Here are some verbatim student responses.

What did you learn?

What would you change about the activity?

Are you seeing what I’m seeing? The students wanted more work for this Murder Mystery Challenge!! I did very little reading about games and gamification when designing this, but from the little I’ve read, there’s a “sweet spot” all addicting games hit, when the amount of effort you’re putting forth in a game results in just the right amount of reward. So the sweet spot here seems to be a good balance of time spent on the Challenge, number of clues tracked down, and doing new and different tasks.

In Fall 2015, we plan to stage the Murder Mystery Challenge for the third year running. We’re pretty happy with how the Challenge was revised, but we might incorporate using our new discovery service, OneSearch (Primo).

We’re also developing the Murder Mystery Challenge as an online-only activity wrapped up in a Blackboard quiz for online students who need a fun but educational introduction to doing library research online. We’ll have to remove finding a book in the stacks, and add one or two other online activities to make up for it. For this, we’re teaming up with our online learning office and instructional designers, which has been very fruitful for both parties.

I must say, this has been one of the most fun things I’ve done as a librarian! It was enjoyable to create a little mystery game using library resources only John Jay has, and it’s so rewarding to partner with other departments at the College — and to see students having a great time learning in the library.

For a little more on the Murder Mystery Challenge 2014, see the article I wrote for our department newsletter »

TL;DR: I Bootstrapped lib.jjay.cc, a Library backup site with the links to online resources, hosted on my personal webspace with an official-ish domain name.

Over this past weekend, the John Jay College network went down. It was pretty serious: no one off-campus could access the main College website for a while, and even when that went back up, the Library website was down for about half the weekend. Yikes!

I had done two very lucky things earlier in the month:

I’d bought jjay.cc on a whim. I’d proposed that the John Jay web department buy it as a shortlinker, and when they showed no interest, I bought it myself ($10, why not!) and have been using it as a way to shortlink Library content. (More on customizing Bit.ly later.) It looks official-ish, and no one has to know it’s on the same webspace as my other goofy websites.

I owe a shout-out to Val Forrestal, who once gave a talk at METRO about setting up an emergency library site after getting hacked. I’d always thought, hey, I should do that sometime, just in case. And then, on Saturday, the flurry of emails about the campus-wide network issues seemed dire, and it was time. So I whipped up the Lloyd Sealy Library Emergency Backup site at lib.jjay.cc:

With a second page for the database A-Z list: 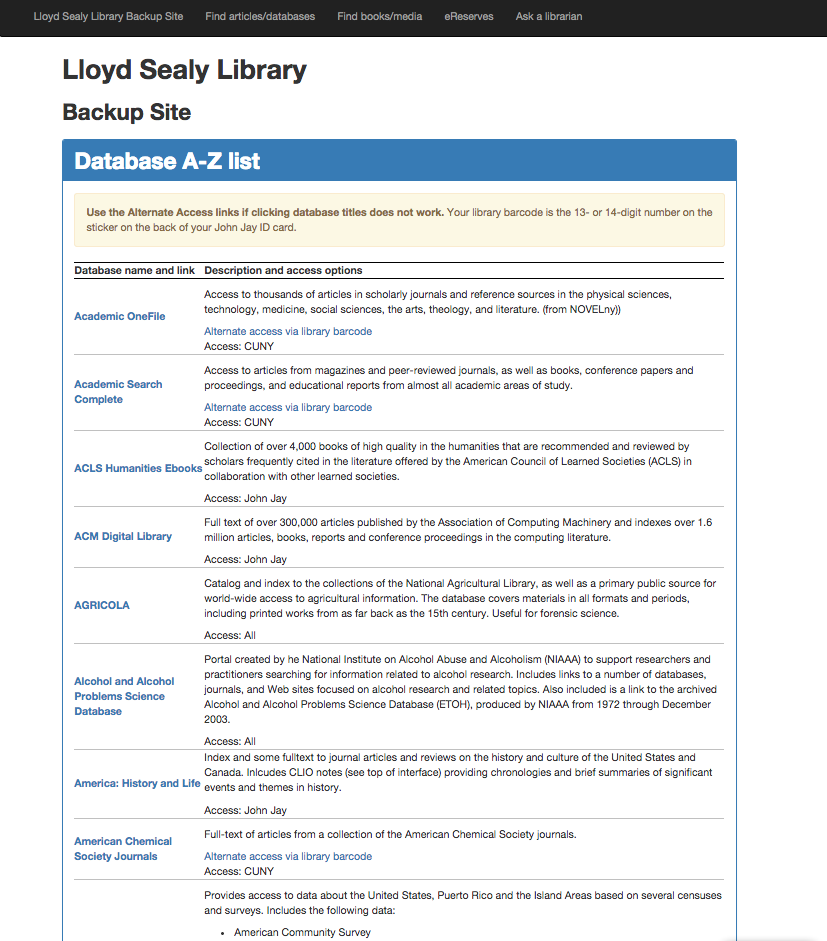 How I made the site

I made a basic Bootstrap template. “Bootstrapping” just means copying and pasting various parts of the Bootstrap framework. I used the navbar, panels, and tables. What’s nice is that everything is already styled and mobile-friendly. I only had to work on two HTML files.

The on-campus network was still functioning, thank goodness, so I VPN’d in to copy the HTML from the normal library site. No need to do anything new when all the code’s already done. EZproxy was also intermittently inaccessible, but luckily, students can also use their library barcodes to log into databases that CUNY subscribes to. We noted that fact on the backup site.

I use Dreamhost as my web host and domain registration service. I created a subdomain, lib.jjay.cc, and used my usual FTP login with Transmit to upload the files. I also uploaded a restrictive robots.txt file so that this backup site would never show up on Google.

It took me under an hour to set it up. We publicized the backup site on social media and got a few grateful responses. We were in touch with the John Jay webmaster about changing the link to the library on the main college site, in case IT told us the network issues would take much longer to resolve. In the end, we just waited it out. And now we’ve got a backup site, should anything go wrong with the network or our servers. (Knock on wood.)

Takeaways: make a stripped-down version of your library website and keep it somewhere safe, somewhere you can access it on- or off-campus. And if you don’t mind spending an extra $10/yr, it might be worth it to buy an official-looking but unofficial domain name, just in case.